We didn’t decide to go to Africa. It’s Africa that came to us, in the most surprising fashion. A phone call, in the heat of August 2013, while we were enjoying some well-deserved holidays, started everything. Lying in the sun of a Greek Island, I was asked if I would consider a position in South Africa. “South Africa? That isn’t exactly in our plans. Whereabout in South Africa? Cape Town?”, I asked, tentatively. “No, Johannesburg”.

And here she was: Johannesburg, the dreaded city. An embarrassing silence suddenly fell upon the conversation, where one could hear the sound of the mediterranean waves in the distance. I didn’t know much about Johannesburg at that time. Or at least, that’s what I thought. But my head was actually filled with flashes of decayed buildings, clustered homes, window bars and electric fences. Images of shotguns, drug dealers, robberies and heartless crimes, just to name a few, were running through my mind while a  dizzying sensation crawled its way up from my stomach. I was feeling bad, physically bad. And before I knew it, before I even had the chance to consider the scope of our possibilities, the inevitable conclusion just imposed itself onto me: there was no way we would ever live in Johannesburg. Too dangerous. My guts had already decided for me.

But something had been triggered. I’m a quick dreamer and a profound sense of curiosity was already arising inside of me: how is it, South Africa? And how do people live in Johannesburg? I must reckon that South Africa had always been on my mind. I was too young at the time of the fall of the Apartheid to fully grasp its significance, but I’ve always been mesmerised by what people had achieved there. How can a whole nation forgives what most people would consider unforgivable? How can it peaceful shift from one of the most cruel political regimes to one of the most progressive constitutions in the world? “There must be something about this place”, I kept thinking, and this is what I truly wanted to understand. Being offered the possibility to discover it with my very own eyes was beyond my dreams.

So I was trapped. My head wanted to go, my guts no.

I looked at Luis. Although I could see he was going through the same questions and fears, there was a genuine spark lingering in his eyes that I had never seen before. The unquenchable thirst of the new adventure ahead had already taken him over.

Naturally, we spent the next two weeks desperately looking for news and information on the internet, or speaking to our friends, family or whoever had set a foot in this country. Not much of a holiday! Loads of information, some comforting, some disheartening. There were moments of great excitement, followed by strong urges of despair. How can one sanely decide to leave everything behind, his home, family and friends, to go a place nobody seemed to share the same opinion about? One cannot, it is as simple as that. A reasonable degree of insanity is required to take such a life-changing decision. But luckily for us, in all of this decision-making process, we came across a few blogs of expats who lived in Johannesburg that really helped us. Thanks to the excellent work of Sine, Bing and Heather, whose blogs are referenced below, we started to get a feeling of what life truly is in Johannesburg. It was not as terrible as we thought. On the contrary, it was rather exciting!

We’re deeply grateful for the work of our fellow bloggers. Their stories, their memories, their anecdotes truly helped us to picture what our lives in Johannesburg would be. Thanks to them, we took our first step on our long path that would lead us to the Golden City, and to one of the most enriching experience we’ve had the chance to live so far. So, if somebody asks, “why this blog?”, the answer comes quite naturally: to share a little bit of our lives, and a great deal of the joy and happiness that Jozi and its inhabitants have given us. May it be as useful to anyone interested in Jozi as other blogs have been to us!

5 thoughts on “Why this blog?” 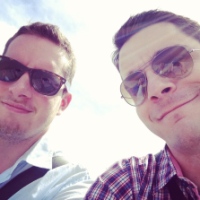