Jozi’s skyline fascinates me. It may just be a few buildings rising from the highs and lows of the city’s many ridges, pressed over the deep blue line of the horizon. It may be so. But to most people, Jozi’s skyline is the powerful image of a city built on hope and dreams that surrendered to countless crimes and sins. It has a mythical dimension that attracts you, that resonates to the many stories you’ve been told as a child, a city of perdition, a new Sodoma & Gomorra,  the Pandora’s box that makes you wonder what’s inside. There are those who stay clear from it, and those who engulf into it. I stay somewhere in between. Many times, I’ve fantasised about the microcosm hidden behind the imprint that I see every night on my way back from work without daring to walk its streets to the full extent. So to tame the beast, and satisfy my strong desire to know more about the city, I’ve decided to start a serie on its most famous landmarks, and see where it leads me. This is the first step in my attempt to know the city, and its people, better.

So let’s start with the Queen of Jozi, the Hillbrow Tower, crowning the city every night in her everlasting glow. Hillbrow Tower is definitely the most iconic building in the city. Peaking at 269m (interestingly enough – or not – the same length as the Titanic), it has been the tallest man-made structure in Africa for the past 40 years and was built as a telecommunication tower in the late 60s. Its construction started in 1968, and lasted for 3 years, six days a week, 24 hours per day, with the first 178 meters rising up at the speed of 18 cm per hour (twice as fast as the fastest growing bamboo. Just saying, in case that means anything to you…). 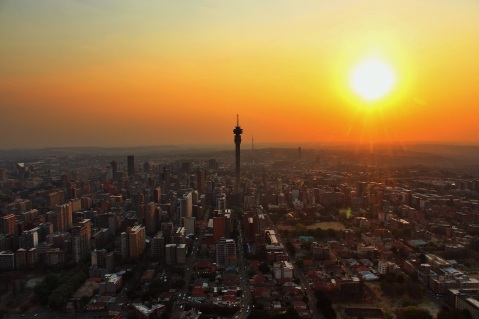 Why is the Hillbrow Tower so tall, one might wonder? Well, there are two schools of thoughts: the first one is rather fact-based: most telecommunication towers of the times were using the radio waves technology, which unfortunately are subject to interference from thunderstorms, quite common in the City of Gold during summer,  as I’m sure you all know by now. Hillbrow Tower was therefore built with the purpose to use micro waves transmission, the latest technology of the 60s, which travels in straight lines from one receptor to another. But to do so, the tower had to raise above all the skyscrapers that were popping up in the city like mushrooms on a rainy day. When the construction of tower started, there was for instance another gigantic project going on: the excavations for the Carton Center, the tallest office building in Africa, had started the year before.

Bird eye’s view of Hillbrow, with its clear landmarks: the Hillbrow Tower and Ponte

The second explanation is less largely discussed, and much more subject to interpretation. In the 60s, following the Sharpeville’s massacre, South African policies were under large scrutiny and deeply criticised, with the first embargo voted by the UN in 1963.  The erection of what was at the time the tallest structure in the Southern hemisphere was a an act of defiance, and the standing confirmation of South Africa’s wealth and power to whom was questioning its model. It is interesting to point that the tower was originally called the JG Strijdom tower, in reference to JG Strijdom, the prime minister of South Africa from November 54 to August 58, described by many as a uncompromising Afrikaner nationalist and a proponent of segregation who successfully shaped the future of Apartheid. The tower was renamed in 2005 only, to the laconic and deeply-depressing “Telkom Jo’burg tower”, naming that I cannot resign myself to use, and to which I prefer the rather confusing “Hillbrow Tower”, that some people use to also describe the Ponte Tower (more to come on this one in another post).

Hillbrow Tower, with St John’s College in the front

Upon its completion in 1971, the Hillbrow Tower became instantly one of the main attractions in the city. It had six floors opened to the public (from 131 meters onwards), two restaurants, one of which, the Heinrich’s, the highest restaurant in Africa at 197 meters, was revolving at the speed of one to three times an hour, and was considered as one of the finest places in the city, decorated with pieces from African artists and tapestries depicting subjects as various as the birdlife in Africa, the story of communications and early scenes from Jozi’s life. The view deck could accommodate 200 people who would enjoyed a stunning view over the city and its surrounding through its 24 large windows. 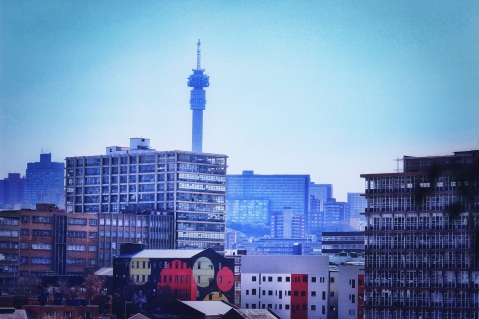 Hillbrow seen from the Maboneng precinct on a winter day

If you climbed up the tower on a very winding day, it would have been very surprising you’d notice the tower’s sway: 41 centimeters, much less than the usual few meters sway of buildings this size. This is due to its 42 meters foundation, and  some other “special structure technique” that kept the building “straight”. Quite interesting fact, as Hillbrow was famous at the time to be one of the most liberal areas of the city, and definitely the queerest one. Any conclusion as to why officials had intended to erect a rather suggestive straight shape in the queerest place of the city has ever been and will remain pure speculation only. 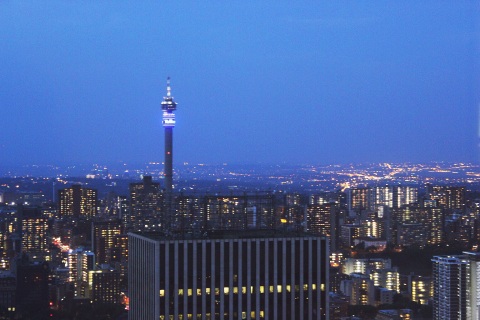 Hillbrow Tower at night, from the Carlton Center

The tower opened to the public for a decade only, and closed its doors in 1981, due to political unrest and the fear that the attraction would be used as a target of guerilla attacks. It has since then been used as an office block from Telkom’s employees and is supposedly not likely to open to public anytime soon. 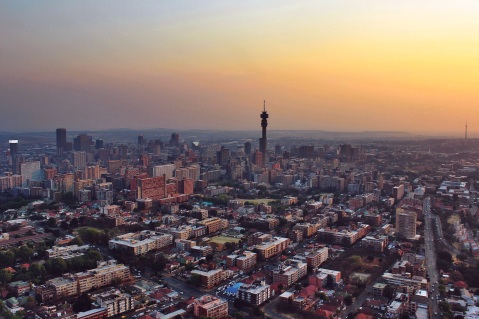 Hillbrow Tower, with the Sentench Tower rising in the back, another famous landmark of the city

There are nevertheless plans to rejuvenate the area, with the Johannesburg Development Agency planning to turn  Hillbrow into the he largest public art space Johannesburg has ever seen, with safe and pedestrian-friendly spaces, leading at its center to the Hillbrow Tower that would then become the Eiffel Tower of South Africa.

The first phase of the project is due by mid-2015, and to be honest, I haven’t read anything substantial on this matter yet.

Let’s just hope that the JDA will succeed in delivering its promises, as I’m sure that most Joburgers and foreigners alike would be keen on taking a walk back to what was a few years ago one of the most cosmopolitan and trendiest places in the city. This would surely be one of the greatest achievements of the agency, and the confirmation of the city’s greatest strenghts: to keep surprising you in the most unexpected ways.

A pedestrian walking down the Nelson Mandela bridge, with Hillbrow Tower in the back

Maboneng view of the Hillbrow Tower

One my first shot of the tower, taken from the Red Bus tour, on the week-end of our arrival… 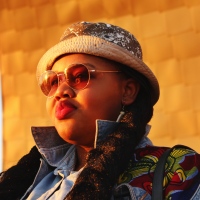