If you’ve ever crossed the Mandela bridge, you’ve surely come across an old Victorian structure that stands erect and abandoned on a large piece of land at the entrance of Newton. Well, that’s the old Park Station, and the subject of today’s post.

Most of you surely wonder what on Earth this beautiful piece of architecture is doing here, and why it is left is such a state of decay? That’s quite a story, so bear with me and I will try to answer some of these questions to the best of my knowledge (and mostly thanks to the Heritage Portal, by the way). 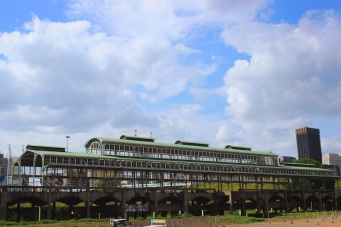 The old station on the abandoned piece of land

The station was commissioned in 1894 by the ZAR government to the Dutch architect Jacob Klinkhamer (1854-1928), a civil engineer specialised in semi-industrial buildings. Jozi had been funded 8 years ago, and was going through rapid changes in the heat of the gold rush. Migrants were arriving by hundreds everyday, and the mines desperately needed coal and heavy material to operate. The development of a proper railway system was a necessity, and it was decided that the city would be equipped with a station at the size of its ambitions. Yes, but in a young city like this, full of miners and landlords, where to find the architect to design such a beauty? Not to worry. The ties with the old  Dutch Empire were still strong: they had the man, the skills and the foundry. They would provide the station.

Of course, the next question was: where to locate the building? There were three main stations at the time in Johannesburg: Kazerne, where goods were delivered, Braamfontein and Park Halt, both of them for the visitors. Of the two, the latter was the most popular as it was closer to the very centre of the city, and the commercial streets of Eloff and Pritchard. That’s where the structure would be erected, and Park Halt would be renamed  a few years later “the Johannesburg station”, name that, strangely enough, nobody seems to remember. People still refer to the station as Park Station, although the park standing next to it is long gone (if it ever existed)

But let’s go back to the early years of the station: it was forged in the Hague (the seal “Pletterij den haag” can still be seen on its columns today) and shipped to Jo’burg, where it was to start its magnificent destiny. That was without counting on the numerous misfortunes of the monument: from the original structure designed by Klinkhamer, only the main platform, its roof and a few buildings were erected (1896-1897). Forget about the large main building (1200 square meters) that was part of the original plan, housing the concourse, the customs, the ticket offices, and other facilities. The anglo-boer war was about to start. There were other priorities than to fund such a magnificent piece of architecture.

The winter sun setting behind the 154-meters iron canopy

From the moment it was erected, the 154-meters steel canopy was used as Johannesburg main station for more than 50 years,  completed by adjacent buildings as the inflow of migrants and visitors kept growing. It is only in 1952, when a new station was built, that the iron structure was dismantled. Some say it was sent to Pretoria, but most likely it was moved to Kempton Park where it was used as training center for railway personnel. Anyway, during 40 years, the structure was out-of-sight, and people had long forgotten about the gracious Neo-Dutch Renaissance building when it was suddenly resurrected, in 1995, in its new location.

What are the reasons that led to bringing back the canopy? Again, not fully clear. Plans were made to erect a Railway Museum on this new location. Any concrete action in that direction is yet to be seen, although the project seems to be tentatively revived from time to time. In the meantime, it has been used by truck drivers to practice their reversing skills. In October 2014, a new market was planned to be launched on this site. Again, fate had it that the market would rapidly shut down, and is now planned to reopen in September 2015. What is sure is that the building was at some point used for illegal rave parties, and now hosts celebrations like weddings or Halloween parties, when it is not used to shot neo-gothic videoclips like the one below (according to the Gauteng Film Commission… I had personally a hard time recognizing the station…).

Well, no matter what its use is, there’s one thing for sure: Jo’burgers still have at heart their old station, and find in its multiple reinventions an echo to the history of their city. Let’s now hope that the dark days are over, and that the station can rise again to enjoy the bright future it deserves.

If you have the chance to get closer, you will still find the “Pletterij den haag” inscriptions on the columns

Inside the belly of the whale…

A rad place for some rad graffitis

Sentench Tower overlooking the station… Surely one of the next landmarks’ post!