The Flame of Democracy, at the entrance of the Constitutional Court

Constitution Hill is a very special place, in the sense that it fully embodies the darkest hours of the city and in the same time a glorious attempt to build a brighter future for the country. People here strive to ensure that the memories of the past, as dark as they may be, are remembered so that the values of the Constitution are kept alive and embedded in the laws of the country. Seeing how this process has been integrated at all levels, even in the architecture of the place, is a fascinating experience and that is why I can only recommend to whoever comes to the country to go and visit to the hill. You won’t be disappointed.

The story of the hill started at the end of the nineteenth century, when the Boers decided to build the old Fort around a white-male prison. They did so in a attempt to protect themselves from the threat of a British invasion, with the intention to hold there the British prisoners. Quite an unfortunate attempt, I must say, as a few years later, when the British finally invaded the city of Johannesburg in the midst of the Anglo-Boer war, the exact opposite happened. Boer prisoners were held captive and executed in the Fort. Life can be sadly ironic sometimes.

Strolling on the top of the fort, you get some nice views of Hillbrow’s skyline

A few years later, a “Native” section, called Number Four, was added to the fort, as well as the women’s jail. All sorts of dissidents were held prisoners there, from political activists to common law prisoners, including people who simply violated the inhuman pass law. The hill is now unfortunately well-known for having hosted some of the most famous human rights defenders: both Mahatma Gandhi and Nelson Mandela indeed served time there.

In the 1920s, the awaiting-trial block was constructed on the hill, but don’t even try to look for it: it was since then dismantled when decision was make to locate the Constitutional Court, the highest court in the land, on the top of the hill. That’s where the story of the hill becomes deeply interesting, and deeply moving as well: the bricks of the old block were used to build the premises of the Court and can be seen from the main room, to ensure that neither the Judges nor the public will ever forget the foundations on which the new democracy was built.

The glorious South African flag, hanging on the bricks of the old awaiting trial block of the prison

While visiting the hill, you will go through the different sections and receive testimonies in many forms from former prisoners as to how infamous conditions were in the prison. During the visit, you will also realise how deeply the apartheid system had made its way throughout every layer of the society since,  even on the hill, white prisoners were far better treated than the Natives. 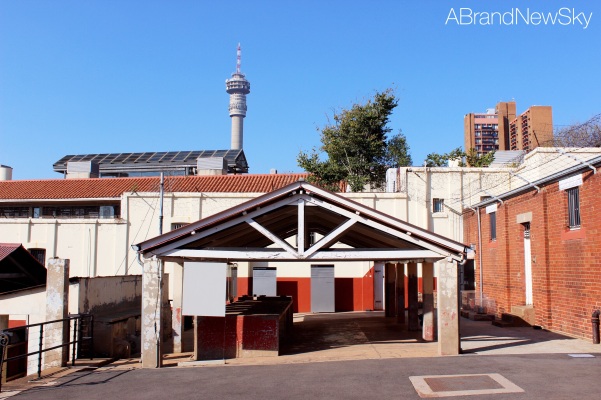 The yard of Section Number Four

The visit of the Constitutional Court is surely the highlight of the time spent on the hill, as it sheds a new light, full on hope, on the dark reminiscences of the prison. The building is made of 60% of glass, so that everyone can see what is happening inside. It is designed under the “Justice under a Tree” leitmotiv as traditionally, people in Africa used to gather under a tree to listen to the elders and settle their domestic problems. This can be seen not only in the emblem of the Court, but in the design of the building itself where everything, from the tapestries to the chandeliers, is shaped around this idea. You will get to see the Court itself, as it is also opened to the public, even during the sessions, and will soon notice that the Judges are seated on the same level as the public, to ensure that a certain form of equality is guaranteed during the sessions. Last but not least, you will stroll through the atrium and discover a wonderful art collection of African and foreign paintings and sculptures. I even spotted a few Chagalls there, to my greatest surprise! 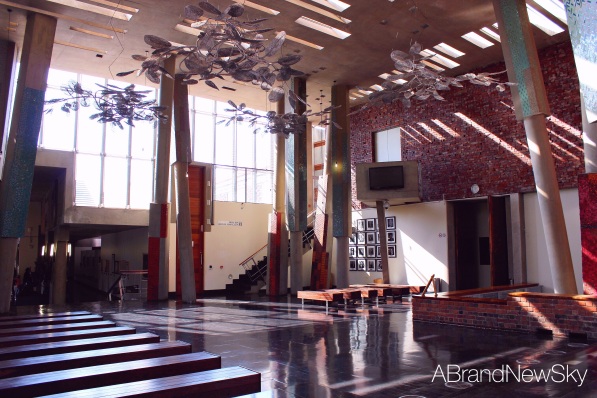 The entrance to the Constitutional Court: everything here is designed around the “justice under a tree” emblem, from the columns, the tapestries and the chandeliers

I must confess that I had somehow postponed my visit to the hill, for a couple of reasons: the first one being that many South Africans seem to refer to the hill as a dark place (to a certain extent, rightfully so) and try to avoid it at all costs; the second one being that after having visited Robben Island, I didn’t think that an afternoon on Constitution Hill would add much more value to what I already knew. I must confess that I was utterly wrong and the visit I paid that day to the hill is one of the most fascinating experiences I’ve had so far in the city. I’m thus looking forward to my next visit there, and will make sure that every foreigner who comes to visit us will do so. Three is indeed no other place like Constitution Hill.

To know more about the hill and the guided tours, you can visit the Constitution Hill website. You will also find lots of useful information about on the symbolism of the building here.

Paitings are everywhere on the hill. Here at the entrance of Section Number Four

A view over Section Number Four, with at the bottom, the isolation cells (section 5)

Who is a criminal? Good question! You can spot Ghandi in this pic, 2nd out of the 8 portraits on display

Looking up from section 5, prisoners could see the Hillbrow Tower casting its shadow over the prison

Another view from the yard of Section 5

Throughout the visit, you are reminded of the excruciating conditions in which the prisoners lived

The architecture of the place, a mix between the old developments and the new istallations of the Constituional Court, gives a unique flavour to the hill

A peak at the Northern suburbs from the Fort

The entrance to the Court, and my first acknowledgement of the 11 official languages of the country

Justice under a tree, the emblem of the Constitution

The Constitutional Court is opened to the public, and you even get to sit in the public area

The light, scattered through the blind and reflected on the majestic tapestries, purposely creates the effect of the shade of a tree. Every single detail has been thought through to ensure that Justice is indeed imparted under a tree!

Wooden sculpture at the entrance of the atrium

The long gallery of the art collection. The pieces exhibited here are of great quality. This was a much pleasant surprise!

There are even a few Chagalls exhibited in the gallery!

The view over the Northern suburbs from the atrium